Over the past two weeks, the price record for a comic book was broken not once, but TWICE--each time exceeding $1,000,000 for a SINGLE Comic Book!!!

The first record to be broken was for THE FIRST Superman comic book ever published in FINEST KNOWN, UNRESTORED condition!!! The book sold for $1,000,000 via private treaty.

Just a few days later THE FIRST appearance of Batman sold at public auction for $1,075,000. Want the real surprise, the book brought the record amount because it was THE FINEST KNOWN!

Want another "huge" surprise? The reporter for the Washington Post said "They don't want a Van Gogh or a Warhol or a Picasso. They want something that means something to them. Spider-Man, Superman and Batman--that's history to them. And in this country, we're a society built on popular culture.

Folks, in this blog, and on this site we go to every possible length to bring you the most sophisticated and expert advice that is available on collectibles ANYWHERE. This advice is a culmination of over 50 years of combined experience in the collectibles markets and over $125,000,000 in sales. The advice has allowed me to retire for life and move to Park City, Utah at age 42.

Check the blog for our post titled, "The most important number in collectibles," where we explain why the FIRST of anything is so highly desired. Check our blog posts ad nauseum on why condition is so critically important and why restored ANYTHING should be avoided like the plague. Check our blog post titled "Don't be a thumbsucker," which explains why it is CRITICAL to pay whatever it takes to get the finest known material. Check our blog titled "2010 Predictions Part One," where we explain the rush into tangible assets. Check our special report " 12 Critical Reasons Why...where we explain that these posters are so highly desirable due to their historical significance and tremendous fanbase of the music and era.

Thankfully, we have several hundred clients around the world that do "get it." They understand that if you pay $15,000 for a poster most would say is worth $8,000 or $9,000 but is the finest known, that THEY are in the cat bird seat, and THEY can NAME THEIR PRICE when the time comes to sell. They are winners and we're glad to represent them.

Right now, the Finest and Rarest and Most Desirable concert posters in the world can still be bought for ridiculously low sums. People that act on this opportunity are going to be richly rewarded. We give you the advice, the posters and the guarantees. The rest is up to you!

One final comment, it would be great to get some feedback on the advice we impart. A great deal of research, thought and care goes into each post. Please take a second to comment on our posts so that we can begin a meaningful two way dialog. That way, we as the authors can get something out of this endeavor as well as the readers. Thank you.

You can read further on the two record comic books at the following links: http://today.msnbc.msn.com/id/35524375/ns/today-today_books/ 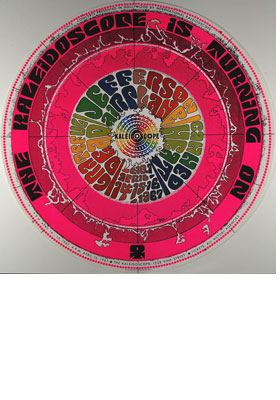