Last week I had the good fortune of attending the Rolling Stones’ Exhibitionism Museum Exhibit in the West Village of New York City. Exhibitionism opened on November 12, 2016 and will run until March 12, 2017. As a reader of this blog, you are advised to attend this exhibit if at all possible. Here’s why:

Exhibitionism is a band authorized exhibit that features the actual memorabilia saved and owned by the band themselves. Because of this, the quantity and quality of memorabilia displayed is truly breathtaking.

The exhibit is broken up into several sections. There is an actual full, life sized reproduction of the apartment the band lived in during the early years, before fame struck. Early artifacts include Keith Richards’ diary from 1964. There is a complete section that reproduces, again in full size, their early recording studio. This section features actual recording logs, and handwritten lyrics of every Stones album ever released- INCREDIBLE! 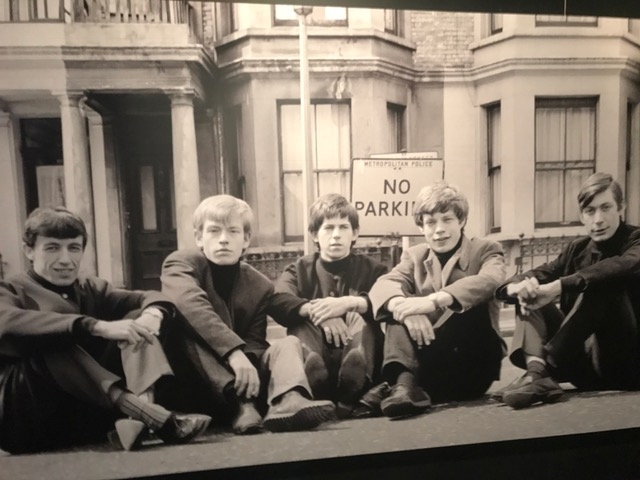 There are several other sections as well, , that encompass every other possible facet of the band, such as album cover and logo design, and so much more. When it came to early 1960’s Stones posters and handbills, there was some material, but it was definitely not in abundance.

The tour ends with a fantastic 3D Virtual Reality Concert Experience that puts you right on stage with The Glimmer Twins and at other times front and center “on the floor”, right next to enthusiastic fans dancing in the crowd. For all of us that have read so much about how Virtual Reality is “the next big thing”, this was a really entertaining preview of things to come.

It should be IMPORTANTLY NOTED that the day I attended, the exhibit was VERY WELL ATTENDED. The interest, importance, appeal and appreciation of this era and it’s music continues to grow stronger and louder. When you see hundreds of ordinary folks that have paid good money to see rock and roll memorabilia, it gives you confidence that the posters that we all love and collect will surely be more highly sought after with each passing year.

In addition to the tremendous quantity and quality of memorabilia displayed, the most impressive thing about Exhibitionism is the incredibly professional way the material was presented. I cannot imagine a rock and roll museum exhibit being any nicer. When you add all this together, it’s not hard to understand why Exhibitionism has earned rave reviews from The New York Times, The Wall Street Journal and USA Today.

In addition to these positive critical reviews, I personally know 4 other friends that have also attended Exhibitionism and loved it. So make whatever effort you need in order to attend, you won’t be sorry! If you have attended Exhibitionism, have an opinion about the huge mainstream public interest in this era and music, or just love The Stones, please leave your comments below!

To read the USA Today Review of Exhibitionism, click here >>