175 Vintage Concert Posters are being Sold Without Reserves

Psychedelic Art Exchange announces their October auction of vintage 1960's concert posters, is now open for bidding. The auction ends Thursday, November 2, 2017, at 9:00 pm ET. All posters are being sold unreserved and have starting bids of $100 or less. 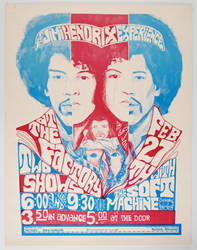 The auction includes an ultra rare Jimi Hendrix concert poster that promotes two shows at The Factory in Madison, February 27, 1968. It is the very first time this poster has been offered at public auction.

Other major rarities being auctioned include:

In total, the auction offers 175 vintage 1960's concert posters promoted by Bill Graham at the Fillmore Auditorium, Chet Helms' Family Dog at the Avalon Ballroom, and Russ Gibb at the Grande Ballroom.

Bands featured on the concert posters include The Rolling Stones, Grateful Dead, Jimi Hendrix, The Doors, Janis Joplin, Chuck Berry, Jefferson Airplane, and many others.

"We just published a free Collectors Guide that explains these beautiful concert posters are historically important and issued in tiny quantities. Very few survive today," explained Glen Trosch, of Psychedelic art Exchange. "When collectors compare our $100 opening bids to mass produced coins, comic books and baseball cards that can be worth millions, they get very excited. That's why demand is growing so fast!"

Get your free Concert Poster Collector's Guide and check out the auction at ConcertPosterGallery.com