It is well known among music aficionados that the venerable New Orleans jamband, The Radiators, have announced their retirement after 33 years of touring with the same original lineup.

Psychedelic Art Exchange was pleased to promote their final show in the State of Utah on Valentine's Day, February 14, 2011 at the World Famous Harry O's Nightclub.

Psychedelic Art Exchange, since its inception, has been very active in the Park City, Utah and Baltimore, Maryland communities. We believe in giving back to the music community, the people that have made PAE such a resounding success.

The show featured a stellar performance by "The Rads", and more tickets were pre-sold for the event than ANY show EVER at Harry O's. Several clients and friends of PAE flew in for the event, a wonderful reception and poster viewing preceded the concert, and a wonderful time was enjoyed by all.

PAE looks forward to sharing more happy times with all of its fans, clients and supporters around the world. 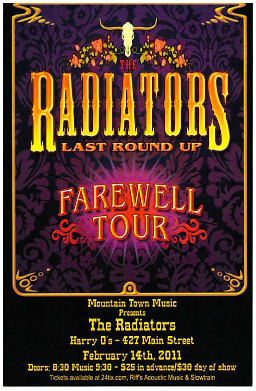