It’s been widely reported in this blog that Vintage Concert Posters have been receiving continuous and widespread recognition and exposure at major museum exhibits around the world over the past few years. The best (by far) is yet to come! 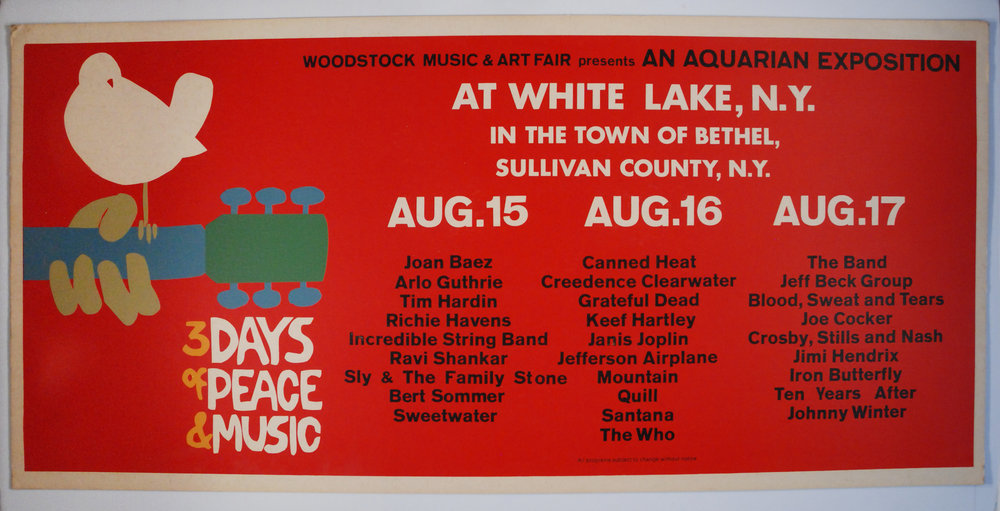 Authentic Woodstock posters are highly coveted and enjoy demand from people OUTSIDE our hobby, as well as within. The poster above is extremely rare and was created for display on the side of a bus. Many experts expect values to increase dramatically starting next year.

All of this will be DWARFED by the international exposure that is now, suddenly, just months away. Beginning on January 1st, the world will be celebrating the 50th Anniversary of Woodstock -- the most famous music festival in history.

In addition to major 50th Anniversary Concerts both in the United States and abroad, there is sure to be major worldwide television, newspaper and magazine coverage of this historical milestone. More importantly, literally millions of people will be exposed to vintage concert posters in major museum exhibits that will occur around the nation. Additionally, PBS and CNN have already announced major multi part 50th Anniversary documentaries next year.

In short, expect for the whole world to have a case of “Sixties Mania”, that is sure to influence the sights, sounds and fashions of 2019.

We have tirelessly reported on the lollapalooza effects that have taken the market for Vintage Concert posters by storm, 1)Incredible beauty, 2)Extreme Rarity, 3)Ridiculously Cheap Prices, and very critically, 4) Unsurpassed Historical Importance, and 5) The introduction of independent, third party grading by CGC.

Exclusive news for readers of this blog! We can definitively state that next year will feature the most important museum exhibition of vintage 1960's concert posters ever offered to the public. This exhibit, will be in one of the most important, if not THE most important art museum in the world!

You've seen this movie before! They say that history doesn't repeat itself, but it rhymes.

It was just 2 years ago that we informed our readers that the market for vintage concert posters was going to receive a major shot in the arm from the world's celebration of the 50th Anniversary of The Summer of Love. We explained that collectors should add to their collections while prices were still at rock bottom lows.

The media kicked in, the concerts were held, television special were produced, and major art museums had lines out the door with people wanting to experience their own little throwback to "The Sixties". This resulted in a huge shot in the arm for the hobby and it's been onward and upward ever since.

All of us have seen firsthand what happens when our little part of the world lands on the front page of headlines. Values have moved up substantially for posters after the passing of B.B. King, Chuck Berry, Tom Petty and now Aretha Franklin.

Because this was news that transcended our hobby and entered mainstream America!

The same exact thing is about to happen with the 50th Anniversary of Woodstock!

As a reader of this blog, we implore you to use the information you have NOW, while YOU ARE STILL WAY AHEAD OF THE CURVE. Use the coming weeks and months to start or add to your collection while supply is still available and prices are still affordable. And, if you ever dreamed of owning an authentic Woodstock poster, and you're lucky enough to track one down, grab it NOW, before the masses arrive to compete with you. You’ll be glad you did!