The New York Times today has a VERY interesting story titled Trading Cards: A Hobby That Became a Multi-Million Dollar Investment. Now wait a minute you might ask, "Isn't this a blog about collecting vintage concert posters?" 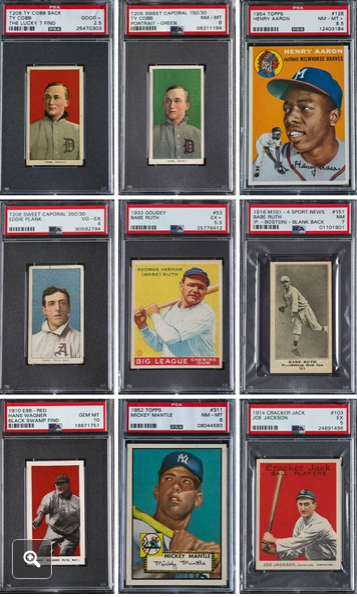 Independently graded baseball cards have exploded in value. Many collectors believe CGC graded concert posters will be next.

The answer is yes, and so is this blog post!

Importantly, The Times reports, "The driving force in turning a card hobby into an investment opportunity has been the acceptance of a single recognized grading system for the condition of the cards. An independent company called Professional Sports Authenticator will rate any card and give a grade from 0 to 10. which assesses a card's condition and, in most cases, determines its price."

For regular readers of this blog, this explosion in baseball card values is not news, nor a unique event. We have repeatedly explained that in each and every collectible market where independent third party authentication and grading has been introduced, an explosion in values for the finest quality and most sought after items has followed quickly behind.

This has occurred in the market for rare coins, stamps, paper money, comic books, trading cards.

Why has this happened? The answer is simple. In collectibles, very small differences in quality equates to huge differences in value. This sets up a conflict of interest between the seller and buyer as the seller is hugely incentivized to grade their material as high as possible.

In addition, authentication is always an issue, particularly in paper collectibles such as rare currency, stamps, comic books, trading cards and yes, concert posters. It's alot easier to forge something made of paper that a coin minted from gold. Professional restoration that makes an item appear to be in Mint Condition -- even though it's been heavily damaged-- can also be impossible for anyone but an expert to detect.

Independent third party authentication and grading solves these problems and allows collectors to participate in a hobby in a safe and secure way. Once these collectors enter a new market, demand quickly overwhelms the tiny available supply and prices increase.

CGC Graded Concert Posters - Where Are We Now?

Nothing in this world happens in a vacuum...everything is relative to something else. That's why many experienced collectors believe that vintage concert posters that have been independently authenticated and graded by CGC represent the single most lucrative collectible opportunity in the marketplace today!

( CGC is a recognized leader in the third party authentication and grading of collectibles. They have graded literally many billions of dollars in collectibles and has just recently begun offering their service for vintage concert posters.)

This market viewpoint is rooted in fact. Last week we completed our 9th Anniversary Auction of of 200 CGC graded concert posters. Included in the auction were two classic rarities, The World Famous Bill Graham #2 Batman and The Legendary Family Dog #2 King Kong. These two posters realized $14,376 and $31,051 respectively.

Each of these posters are so rare that they were the very FIRST CGC graded examples to ever be offered at public auction. They are also some of the most valuable posters in the entire marketplace. The fact that these Ultra Rarities can still be acquired for literally pennies on the dollars compared to ever other major collectible tells you we are in the early days of this exciting collectible.

There's an old saying, "that which cannot go on forever, will eventually end." This slogan can be aptly applied to the current, ultra affordable price levels of vintage concert posters. It's still possible to acquire beautiful Original First Printings in Museum Quality condition, featuring legendary bands performing at historic venues for less than a dinner for two at a decent restaurant. In fact, bidding on most lots in our auctions start at just $1.00!! And as described above, you can still acquire the very finest rarities available for well under $50,000.

Clearly, the time to collect is now, while prices are still dirt cheap and before this window of opportunity slams shut forever!