Life Magazine Declares 1968 "The Year That Changed The World" 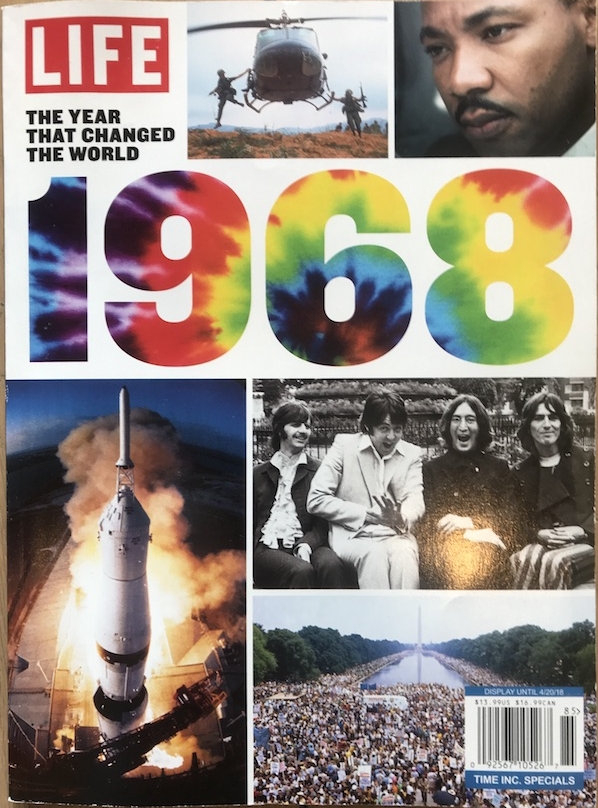 This blog had gone to great lengths to explain the many different factors that have have led to the current explosion in interest and demand for vintage 1960's concert posters. While a long list of positive attributes are now combining into "a perfect storm", no single factor is more important to the attractiveness of this hobby than the historical importance of these posters.

Life's 1968 Special Edition is currently available on newsstands and at the checkout lanes of local supermarkets nationwide. While obscenely expensive ($14.95), the magazine is quite interesting in reviewing everything that happened in just one year: the Viet Nam war, the assassinations of Martin Luther King, Jr and Robert Kennedy, The Apollo 7 mission to orbit the moon, the election of Richard Nixon, peace protests on college campuses nationwide, etc.

A story on the art of the times, and how it closely correlated, commented and documented the times-- The Beatles'White Album and their song "Revolution, The Stones' Beggar's Banquet and their "Street Fighting Man", Janis Joplin and Big Brother's Cheap Thrills, Dylan's John Wesley Harding, the musical Hair, and Tom Wolfe's Electric Kool Aid Acid Test-- are also highlighted.

There can be no question that these were special times, and this was special art, all of which has had a lasting impact on our world 50 years later. Many collectors believe that vintage concert posters, and their links to this history, are the most compelling and authentic artifacts remaining from this all important era. And it is this historical importance that really anchors the desirability of vintage concert posters and makes them so much more interesting than many other collectibles.

One final note: as collectors we often talk about the "The 1960's", the importance of the decade and the desirability of it's concert posters. It's important to remember, that when talking about 1960's psychedelic concert posters, what we are really talking about are posters that were issued primarily in 1966-1969. That's just 4 short years (plus a couple months of late 1965). This represents a tiny fraction of the total universe of concert posters create 1966 to date and explains why posters from the 1960's absolutely deserve the added attention they enjoy and value premiums they command.