Hapsash posters and Osiris Visions posters - a word of caution about reprints.

The OA and Hapshash posters have been widely copied and unless you are well acquainted with the originals and the many fakes on the marketplace, get some good advice before parting with any money. To paraphrase Brad Rogers, a pioneer in identifying the OA bootlegs –”if you don’t know where it’s been for 50 years or you’re not an expert assume it’s a fake.”

Most fakes seen on the market come from the same original source in the UK and printed up in 80’s or 90’s along with various permutations of story about originating from a newly discovered ‘stash’ usually in an attic of a relative of the printers.

These still appear regularly on eBay and smaller auction houses. The reproductions have recently been ‘rebranded’ and often labelled as ‘later ‘or 2nd printings from the 1970’s so being offering at a more affordable lower price, but they are in fact nice decorative items only. So, seek either provenance, expert advice or a respected dealer.

None of the bootlegs are true screen prints and look and feel new and generally 20 x 30 in. There is no standard ‘one size fits all’ and all for authentic OA issues and sizes vary slightly across the series and print runs.

Nearly all surviving Original Hapshash or OA posters are damaged or used in some way. They almost never survive in faultless mint condition. A poster with aging and damp/water stains on the reverse, pin holes, tape residue and handling are commonplace. This can all be positive factors establishing age and originality as most of these posters have ‘lived a life’. So, don’t let that put you off.

Be very wary of white clean new looking paper with no imperfections in near perfect condition. Be cautious of bargain prices as rare originals seldom come at knock down prices. I have also seen fakes that are deliberately distressed and damaged to appear old, so be looking out for this trick too.

OA109 The Move at the Marquee Poster

OA 123 The Who I can see for Miles Poster

OAS 4 The Who at the Saville Theatre Poster

There is also a group of licenced Osiris Visions reproduction posters known as the Yarrowstalk edition printed by Brian Zahn of the US Yarrowstalk counterculture magazine. These posters were screen printed in the later part of 1967 in Philadelphia, Pennsylvania and are the earliest known licensed reprints.

The posters can be distinguished by the lack of OA printing Credit and some copies appear slightly misprinted. Unfortunately, there is no printers mark, but some helpfully do have an elaborate Yarrowstalk stamp and/or Brian Zahn’s signature on the verso. However, it is impossible to determine 100% exactly when they were printed, reprinted or in what numbers.

Mint condition copies still emerge for sale on the market and from the Zahn estate who seem to still have copies for sale. The known Yarrowstalk prints are -

OA 103 Hendrix at the Fillmore Poster

Although not OA originals or produced in London they are historically relevant as the earliest reprints licenced from Hapshash so they have value, and are not recent bootlegs. They can make an affordable substitute for the more expensive and harder to find original Osiris Visions posters 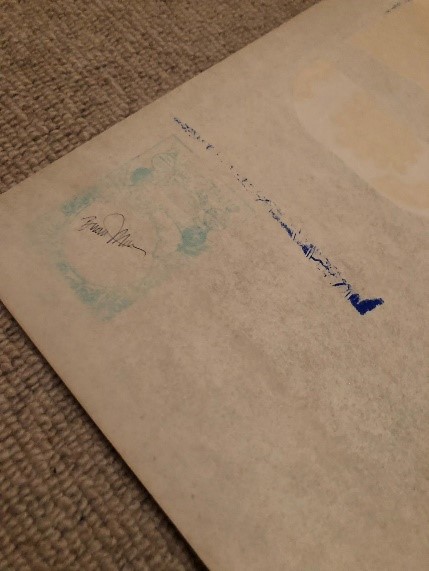 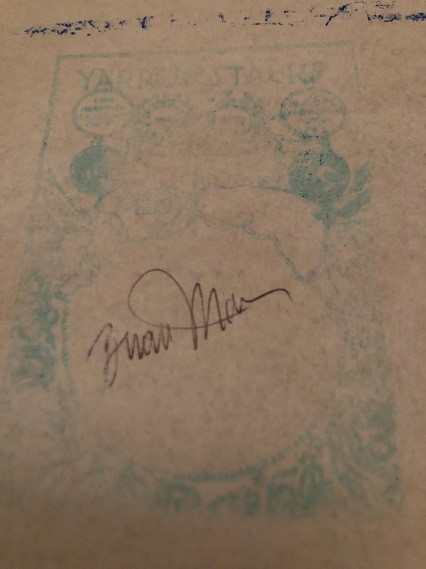 Verso of Hendrix at the Fillmore OA 103 Yarrowstalk edition

One of the great joys of collecting is also that of occasional rediscovery and recently several unknown original Hapshash works have come to light. They have no OA number and not works printed for Osiris Visions, but they have been acknowledged as original pieces by Nigel Waymouth. Hopefully there is still more to be discovered! 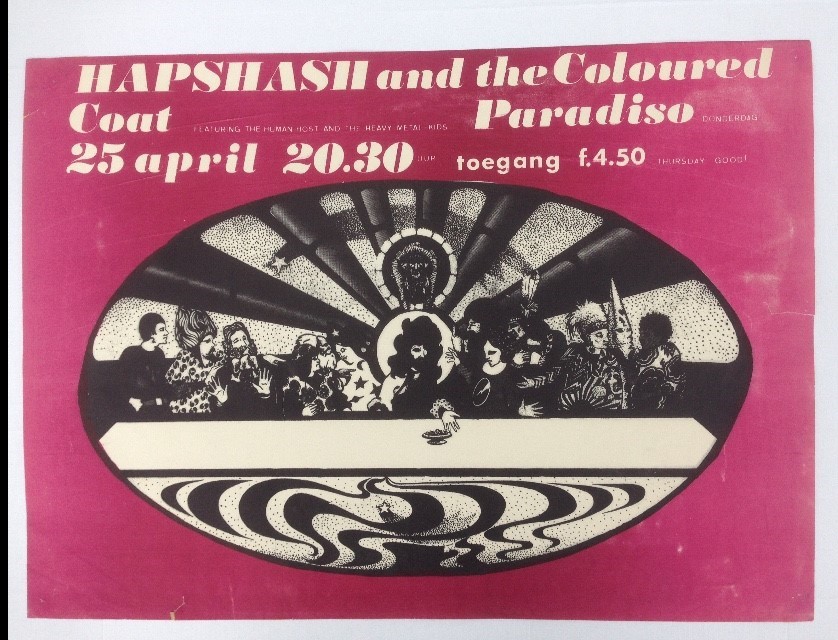 Hapsash and the Coloured Coat at the Paradiso April, 25, 1968

Hapshash and the Coloured Coat at the Paradiso 25 April 1968 / Thursday? Good!

This poster reuses the 1966 pre Hapshash English /Waymouth poster Friday? Good! With a reimagined and irreverent 1960’s Last supper with colourful new characters and uses it as a gig poster for the bands appearance at the famous Paradiso Club in Amsterdam.

Hapshash expanded it interest into creating experimental music recording two albums and naturally creating the artwork and promotional material. As a studio work it seems to succeed with a cast of quality musicians supporting the artists who didn’t play on the albums but as a live act it became shambolic and acrimonious.

The few gigs were apparently improvised, chaotic and only a few more occurred back in the UK. This Holland trip was the only time both English and Waymouth performed together live and Waymouth describes these gigs as the end of their artistic partnership. This is the only known copy which came to light in 2017.

Score it at the Head Shop 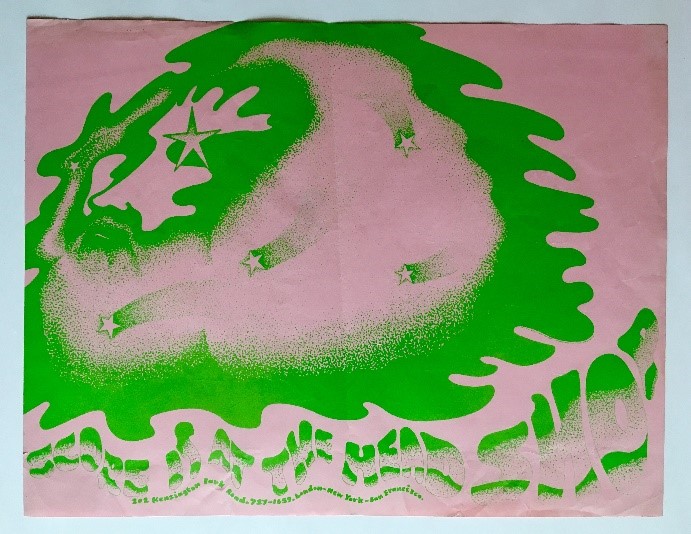 Score it at the Headshop poster

These small promo posters in green on pink paper were given away to customers at the Kensington Park Road Head Shop London. The stoned hippie head surrounded by hashish (?) smoke and shooting stars is typical Hapshash. There are currently two known copies of this recently discovered poster. The wavy ‘Score it at the Headshop’text is similar in style to the text on the Hapshash 14hr Technicolor Dream flyer design of April 67 so possibly from the same early Hapshash period.

This guide was written by Nick Etheridge. Nick welcomes any comments or additional information you may have. can be reached at nicketheridge1@hotmail.com

Whocollection.com. A very useful Osiris poster resource by respected collector Brad Rogers with information and images about the series and his pioneering research on the fake OA posters. http://www.whocollection.com/hapshash_&_osiris_posters.htm.

V&A Museum London – A great resource of many original and rare OA posters in the permanent collection including the International Times file copies and Michael English’s own collection that and can be viewed online. https://collections.vam.ac.uk/.

Useful texts and background for the UK underground scene.

Days in The Life, Voices from the English Underground 1961-71 by Jonathon Green

My White Bicycle: Making Music in the 1960’s by Joe Boyd

The Art of British Rock 50 years of Rock Posters, Flyers and Handbills by Mike Evans