A lot has been said and continues to be said about classic US psychedelic posters. There has been commentary, cataloguing, revision and revelation as material emerges from deep collections and prices and excitement continues to rise.

By contrast, UK psychedelic posters, are mostly uncatalogued and with limited classification making it a potential Wild West for fakery, fraud and uncertainty for the uninitiated.

However, some of the posters that emerged from the London scene are among the most creative, beautiful and desirable anywhere and highly coveted by astute collectors. Today there is enormous demand from collectors and museums worldwide for the few extant copies who recognise the historical importance, stunning artwork and legendry performers and artists who thrived and exploded out of the vibrant London scene of the late 60’s.

Hapshash and the Coloured Coat Posters

The greatest and most cohesive body of psychedelic art from the UK are the almost mythical posters created by Hapshash & The Coloured Coat. The artists Michael English and Nigel Waymouth were initially put together to create artwork for the famous London psychedelic nightclub the UFO on Tottenham Court Road, London and from that wellspring emerged a small but astonishing series of concert posters, record promos, head and fashion shop posters and numerous smaller graphics works like the fold out cover posters for OZ magazine. They eventually recorded an LP culminating in a few live gigs that pre-empted their parting of ways mid-1968. Their legacy of perhaps 30 posters of fantastic quality, ground-breaking printing and rich imagination defines the UK psychedelic era and set new standards for what and how posters could be printed.

It is worth noting that due to scarcity, desirability and limited information all authentic Hapshash posters printed in 1967-68 are considered as 1st pressing originals. Although some popular posters were reprinted during this time such is the desirability and scarcity of the 1960’s originals that these hand produced works are considered equally collectable, a situation quite unique in the rock poster collecting world. 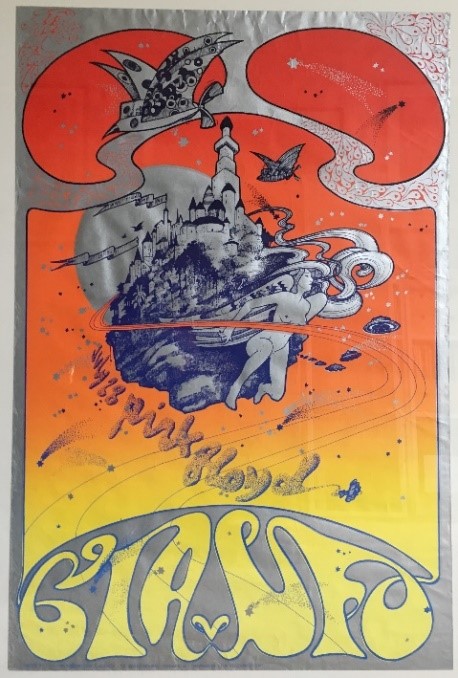 OA114 is one of the most beloved of all Hapshash UFO and Pink Floyd posters. This was for what turned out to be the last night of the original UFO club before pressure from the mainstream press persuaded the police to act and close it down. The poster is a tour de force of cosmic symbols, flying saucers and beautiful printing. This is one of the most bootlegged of all the OA posters and Nigel Waymouth’s personal favourite.

Position 70 OZ 4 poster.In May 67 Hapshash produced the first of two beautiful wraparound covers that unfolded into posters for issue 4 and later 13 of the ground-breaking OZ magazine. The iconic image was reproduced minus the magazine price by Big O as a commercial poster and was still available into the early 70’s. Despite its popularity few have survived. The image shows the unfolded poster.

The majority of the Hapshash output are part of a wider catalogue of posters printed and distributed by Osiris Visions Ltd. This business was set up by Joe Boyd who ran the UFO club and Barry Miles the proprietor of Indica Books and the International Times the leading UK counterculture newspaper.

Once Osiris Visions was established all posters were allocated an ‘OA’ or Osiris Agency catalogue number which was printed onto the posters as part of the printing credit and copyright details which can be seen on all the original OA Hapshash posters apart from a few non-OA productions and early pre-OA printings.

This OA printing credit can be key to deciphering and understanding when, and sometimes where, the poster was printed. The printing credit below is from the last original printing of OA 103 Hendrix at the Fillmore. The Charlotte St. address identifies it as the last of the official printing of this poster dating it between Dec 67 or the early 1968 and the type font indicates it was printed by TSR. 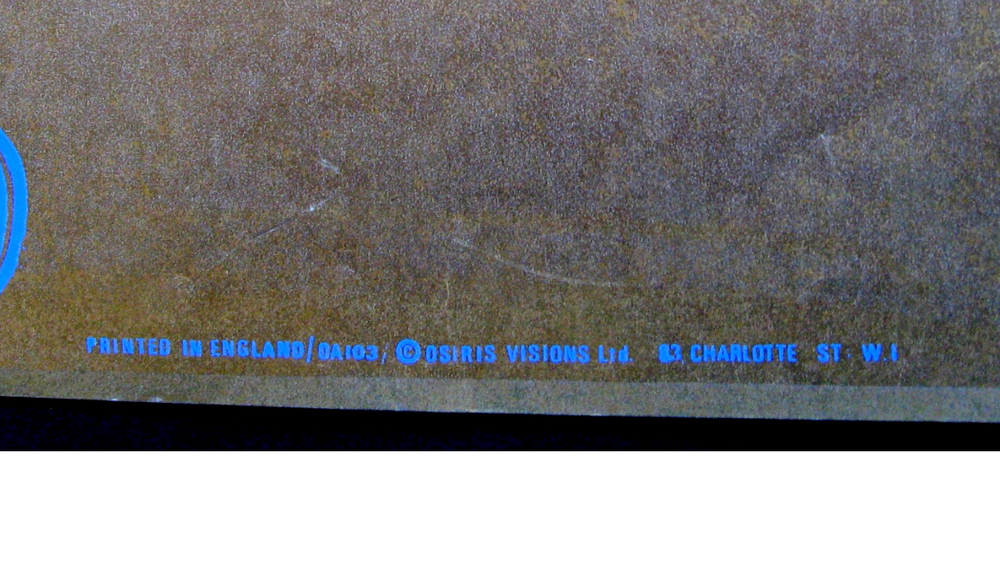 Artists who worked on the OA series were the very best of the scene including Mike McInnerney, Martin Sharp, Adrian George and Greg Irons from the US as well as various images supplied by photographers like Des Dale.

The OA series allocations can appear haphazard with numbers missed, posters reallocated to different numbers as well as numerous and seemingly pointless additional series with only a few posters in it. But at least it is an inventory of sorts even if initially confusing and incomplete.

A key feature of Hapshash posters is they were beautifully hand screen printed with liberal use of bright dayglo and rich metallic inks giving them a distinctive texture, colour intensity and depth. They revived, improvised and improved split colour ‘rainbow printing’ mixing different colours seamlessly to dramatic affect. Despite the process being labour intensive it might be used multiple times on a single poster. OA 123 I Can See for Milespromo Track Records for The Who has three passes of ink and all are split and graduate seamlessly to different colours!

Unfortunately, these printing methods are time consuming and very costly so only small numbers could be produced (100’s not 1000’s) and the fact the best posters were silkscreen meant Osiris Visions made little if any money from them.

The printing process also prohibited any large-scale production as the individual colour screens used to pass the ink through would quickly wear out from the abrasion of forcing ink over and through them by hand with a squeegee. Additional runs would need new sets of screens crafted from templates prepared by the artists and increasing the run size did not reduce costs. 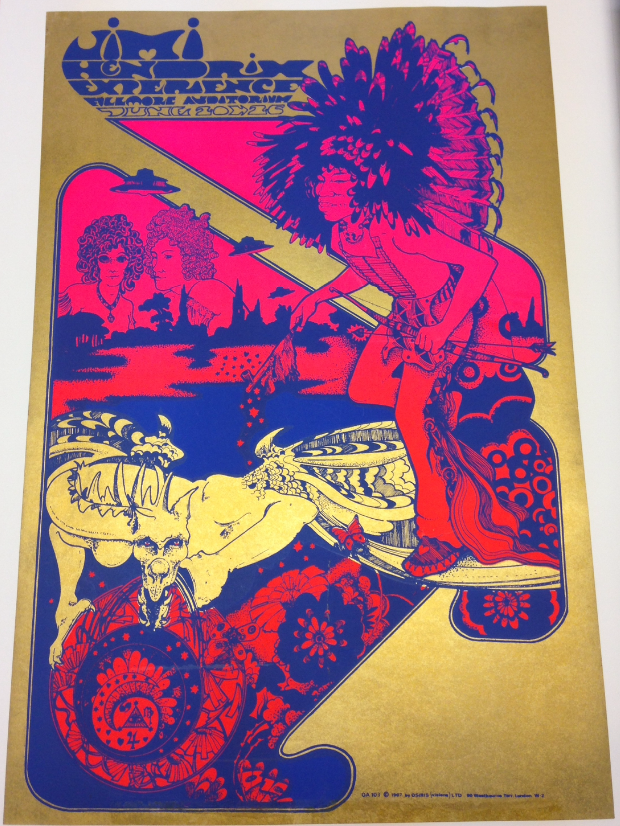 The handmade screens would never be identical one printing to the next or from one print shop to another. The incredibly popular Hendrix at the Fillmore OA103 was printed no less than five times at three different locations each with distinct layering of overlapping inks. A small point perhaps but the district differences are very useful now to help determine authenticity and chronology of printings. Despite the multiple printings it is still rare as an original due to the modest numbers printed.

About half the concert posters were fly posted often in dazzling large groups and the others sold on but Osiris Visions ran at a loss due to the high production costs required to produce them. Joe Boyd finally closed Osiris Visions mid 1968 as the poster business declined and the Hapshash partnership dissolved. 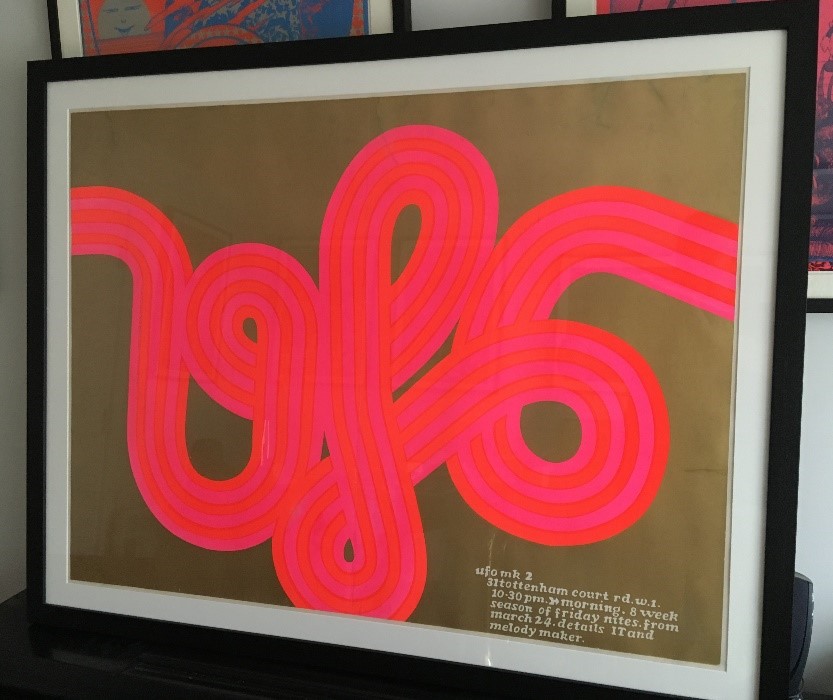 This was the first stunning work from the Hapshash collaboration in March 67 and is considered a Pop Art masterpiece. It’s an impressive 30 x 40 inches and expensive to produce so probably printed in very low numbers. It is a flowing pink/orange peppermint swirl spelling UFO floating over a gold background. They were posted around the streets of drab London in large groups and must have looked mesmerizing.  This advertised six weeks of shows at the UFO Club that included Pink Floyd, Soft machine and Arthur Brown. It is sometimes referred to as the’ toothpaste poster’ and as an original incredibly rare.

The artwork from Hapshash is distinctive for their use of styles and images from Pop Art to Art Nouveau (both original and plagiarized), mystical symbols and mythical animals, ground-breaking and playful use of split colour printing. Within many of the highly detailed and layered artworks will be found small whimsical details, cartoon characters, unnoticed cryptic messages and astrological signs that all add to the mystique of the posters.

The desire for a cohesive vision in the poster was paramount to the artists and perhaps at times more so than what was being advertised. Information was often minimized to the periphery or integrated directly into the graphics raising them to more ‘objet d’art’ rather than a throwaway promotional device. 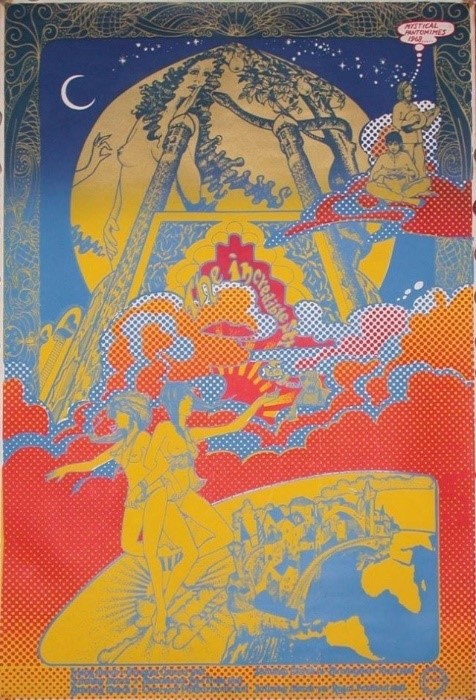 Full of sexual and colourful symbolism. Fantastic multiple split colour passes of ink from gold to yellow and red and a dark to light blue over the top. The tour name only appears in an obscure thought bubble and tour dates modestly displayed (or obscured) in the bottom border over rows of red dots. The band’s name appears in the clouds alongside other small characters over a sea of geometric dots that cover the lower portion of the poster. This poster also has the circular Hapshash logo used on design work in 1968.

Most Hapshash posters are screen printed but this is not always the case. Joe Boyd of Osiris Visions requested that Hapshash use the cheaper offset litho process to reduce costs but they prefered the silkscreen process due to the fantastic results. However a few are litho printed, including the OAS series.

The OAS  series begins with the four beautiful Sunday at the Saville OAS 1-4 for concerts in September and October 67 which are offset but commonly described or sold as silkscreened. They do have the look of a silkscreened poster but they are all offset on uncoated stock that also gives them a matt silkscreened look.OAS 4 has been bootlegged so caution is required as many copies circulating are reprints.

Despite being limited to offset printing for this series Hapshash still had fun experimenting and there are two rarer variants, OAS 3 Traffic that uses pink and blue rather than black and an OAS 4 The Who that is a darker orange/brown rather than bright orange.

Its not well known that there are six, not four, posters in the OAS series that includeOAS 5 Osiris Visions Promo ( see below) and OAS 6 The Who Sells Out by Adrian George that came machine folded into the first 1000 issues (500 mono 500 stereo) of the Album released 15  December 1967. The album with small  ‘psychedelic poster inside’ sticker and original folded poster today now command a high price. 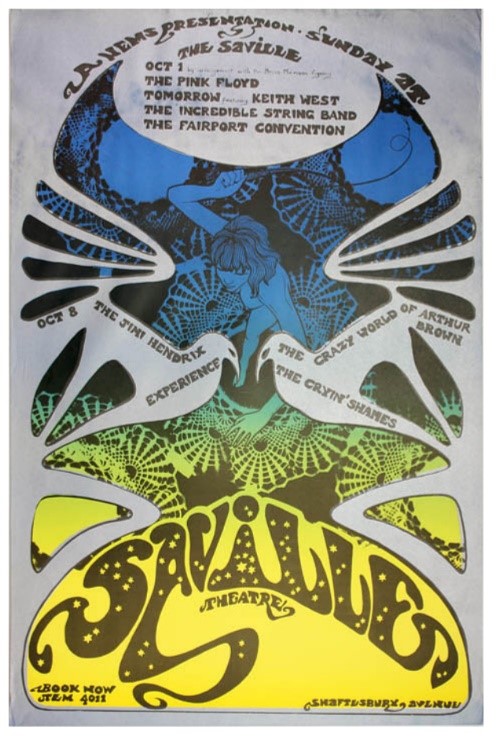 Comonly thought of as a screenprint this litho poster in matt almost grey silver lists a stunning selection of key performers of the UK underground in October 67. Joe Boyd who ran Osiris Visions also managed many of the bands here and also produced Pink Floyds first single. Although performing on separate nights very few concert posters are able to boast both Jimi Hendrix and The Pink Floyd with Syd Barrett on the billing.

This poster and other OA’s were oficially reproduced by the San Fransisco Arts lab in the 1990’s under the supervision of the English and Waymouth with early numbers being hand signed by the artists. This series of reprints uses very bright and shiny metalic inks giving a spectacular but different feel than the originals.

About the Author - Nick Etheridge is a dedicated collector based in the UK and passionate about psychedelic posters from Hapshash to Hawkwind.

In recent years he has become fascinated by the influential groundbreaking posters from Osiris Visions and Hapshash issued for a short period in the heyday of the 60’s scene in London.

Nick is dedicated in his research clarifying the posters, identifying print runs and increasing our knowledge along with helping avoid the fakes that have flooded the market.

Nick welcomes any additional information you wish to contribute on this subject, and is available to answer any questions you may have. He can be reached at Nicketheridge1@hotmail.com

Stay tuned for part 2 which will be published soon!

Whocollection.com. A very useful Osiris poster resource by respected collector Brad Rogers with information and images about the series and excellent research on the fake OA posters.

V&A Museum London – vam.ac.uk; there are many original and rare OA posters in their permanent collection and can be viewed online.

Useful texts and background for Hapsash and Osiris Visions posters and the UK underground scene.

Days in The Life, Voices from the English Underground 1961-71 by Robert Green

My White Bicycle: Making Music in the 1960’s by Joe Boyd

The Art of British Rock 50 years of Rock Posters, Flyers and Handbills by Mike Evans