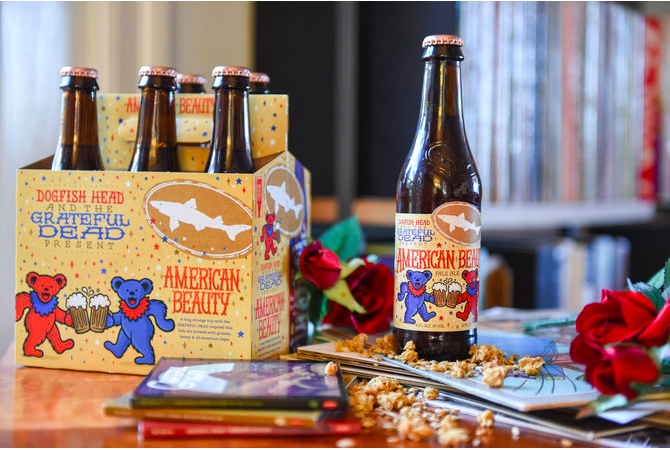 Dog Head Brewery has just announced the release of their Grateful Dead inspired American Beauty Ale which will be available nationwide. The beer is being brewed as a collaboration with the Grateful Dead and features the band’s iconic “Dancing Bears” on both the label and carton packaging.

Earlier this week, during live lot viewing at our Gallery, the conversation AGAIN turned towards the future desirability of vintage concert posters and whether “anyone would care” once the original Deadheads (and other members of 1960’s counter culture) leave to attend the great Festival beyond.

Regular readers of this blog understand that values and music that came to life in the 1960’s are not just alive and well, but quite possibly far stronger and more widely embraced than ever before.

We have reported on the growing popularity of 1960’s influenced fashion, Nike’s release of Psychedelic Sneakers, Rolling Stone’s special Grateful Dead issue, Amazon’s purchase and promotion of the 6 hour Long Strange Trip documentary, the exploding popularity of music festivals across our the world, retrospectives at the world toniest museums and countless others. And let’s not forget something many people thought would never happen in their lifetime, the legalization of marijuana!

One thing is certain, NONE of these projects would be entering and offered to mainstream society if there was not mass appeal and interest.

We see this trend continuing to gather steam. The exploding interest in the 1960’s and the introduction of unbiased third part grading by CGC has led to an exponential growth in the number of people now collecting vintage 1960’s concert posters, which are arguably the most attractive compelling authentic artifacts from the era! It’s a great time to be a collector!

To read the entire article on the American Beauty Ale, click here.