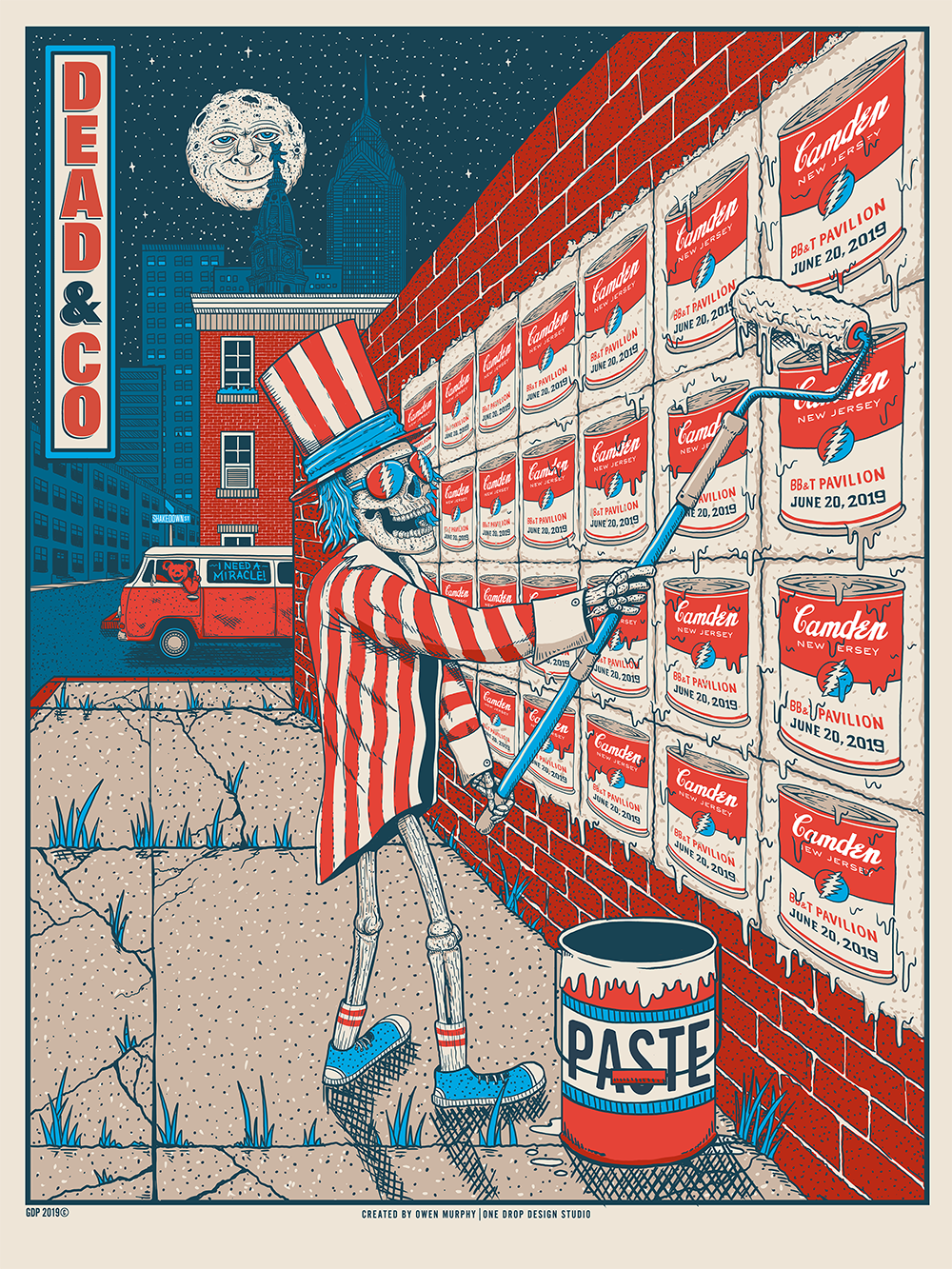 print by Owen Murphy sold out in 5 hours!

A Dead & Company concert poster by South Jersey born, artist Owen Murphy is proving to be a hot collectible. The poster, created for a June 20th, 2019 concert by Dead & Company at BB&T Bank Pavilion, in Camden, N.J., was released in a limited, numbered edition of 700. Collectors snapped up the 580 posters that were made available at the concert in under 5 hours. 50 copies were saved by the band. The Artist’s personal 70 copies are being offered exclusively by PAE on 6/28/19 @ 6:00pm ET, SHARP.

"When Dead and Company commissioned me to create this artwork, it was literally a dream come true," says Murphy." I grew up in South Jersey, listening to the Grateful Dead, and I've attended dozens of concerts at this venue over the past 20 years. My great grandfather even worked at Campbell's soup after World War 1 which is headquartered in Camden. It was critical for me to include as many local references in this poster as I possibly could."

The poster's clever artwork, considered by many collectors to be Murphy's best, features Uncle Sam displaying posters for the show that are designed liked Andy Warhol's famous Campbell Soup cans. Philadelphia's iconic skyline is in the background with a silhouette of a Grateful Dead dancing bear taking the place of William Penn.

Murphy, now based in Baltimore, Maryland, began his career on April 1, 2011, when he created a poster for the popular jam band, Pigeons Playing Ping Pong. In the past eight years Murphy has created concert posters for world famous bands such as Widespread Panic, Phil Lesh and Friends, Govt' Mule, Disco Biscuits, Slightly Stupid, and many others that are now highly sought after by collectors.

To learn more about Owen Murphy and his groundbreaking concert posters, check out his his Instagram page @onedropdesignstudio or visit his Facebook page, One Drop Design Studio.

The Artist’s 70 personal copies will be available for purchase on 6/28/19 at 6:00pm Et , SHARP at Psychedelic Art Exchange’s website, www.ConcertPosterGallery.com.