This week will be the 49th anniversary of one of our favorite concert posters of all time .. and one of the most historically important concerts of all times! 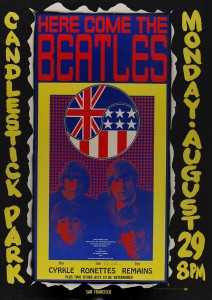 August 29, 1966, The Beatles played their final concert at Candle Stick Park in San Francisco, California. Wes Wilson was commissioned to do the poster for the event and just 300 copies were made, according to Wes.

If you were to own JUST ONE 1960’s rock concert poster, serious consideration should be made to making this the issue you should target. Here’s why:

1) This is the ONLY psychedelic Beatles poster EVER created! All earlier issues were release in the “boxing style” format.

2) This poster was created by the legendary artist, Wes Wilson. Wes is one of “The Big 5”, and is one of, if not THE, most influential psychedelic concert poster artists of all time.

3) As mentioned earlier, just 300 copies were produced. Based on standard survival rates of the era, less than 15% (45-50 copies) still exist in ANY condition, and just the few that have miraculously escaped the past 50 years in Mint Condition are considered major museum pieces.

4) This poster possesses unparalleled historical importance as the last concert held by the most important musical group in history!

When you consider that this poster can still be found for under $10,000, it’s easy to understand why many collectibles experts believed that 1960’s Rock Concert Posters represent a simply phenomenal bargain. To learn more and see the example that PAE has for sale, click here.