Last month, one the most interesting and pivotal characters from the 1960's passed from this plane of existence.

Augustus Stanley Owsley III was a true innovator and iconoclast. He will most notably be remembered for his role in the manufacture and distribution LSD in San Francisco the 1960s, however, there was so much more to this character than just supplying acid to the Haight. He was one of the true renaissance men of the psychedelic era.

Owsley's early association with the Grateful Dead allowed him to take on several roles with the band. He was their first sound-man, and helped finance the Dead early on. Additionally, he was responsible for recording many early Dead shows, as well as other acts that performed in San Francisco at the time. Owsley was also responsible for designing the Dead's behemoth, yet technically advanced sound system," The Wall of Sound".

Even with those accomplishments, Bear was to consider himself an artist . His artistic output will be remembered by most for his part in designing the Dead's iconic "Steal Your Face" Logo. However, when he moved to New Zealand in the nineties, he spent his remaining days as a sculptor and jeweler

Owsley will not likely have the acclaim of rock poster artist added to his accomplishments, because only one poster can be attributed to him. Grateful Dead, Troopers Club, Los Angeles, California, 3/25/66 was the sole concert poster designed by Owsley. This simple yet "trippy" design is one of the scarcest posters in the entire history of psychedelic concert posters. PAE was fortunate to have acquired one of these historic pieces years ago, and it's signed! 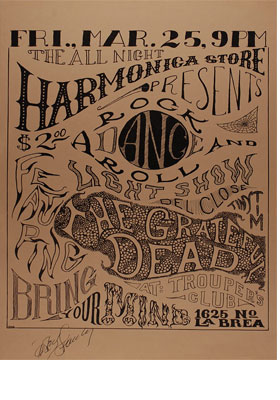