Our current auction features several high quality offerings from 1966, the year that pretty much kicked off what has come to be referred to as psychedelic sixties. San Francisco was historically a home for misfits, and dreamers, so table was set for something big. 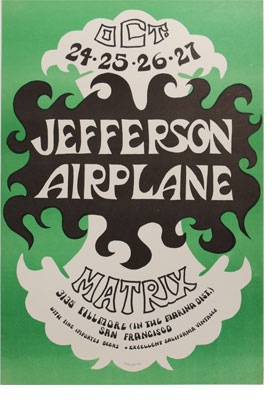 LSD was legal, and becoming available and the bohemian youth of the Bay Area were the first to sow their seeds in that fertile ground. The experimentation, and innovation in arts and culture that grew out of those phenomena cannot be understated. These nearly pristine pieces of art from 1966 represent some of the finest known examples available anywhere from that pivotal year. This was "the" beginning of the poster scene.

Concert Posters were not considered collectible in 1966. Like most other pop culture collectibles, they were produced for an intended use. They were not to be stashed away for future profit. Most of them were used solely for advertising, then scooped up by fans as souvenirs, or to decorate their rooms. They were pinned up, taped up, glued up, and as a result very few remain in decent condition. Only after the promoters realized that there was an aftermarket for this artwork, did they begin to roll off larger quantities and reprint the more popular designs.

The fact that this material is now 45 years old is not to be underestimated. The passage of time has allowed these posters to be appreciated for what they truly are. Important artifacts from a pivotal time in America's cultural evolution.

As with any true collectible, the passage of time adds considerably to their value as well. When I started collecting these posters in 1983 they were roughly 17 years old and I was able to obtain them for a ridiculously low cost . In today's view that would be like collecting posters from 1994. Just to give a historic perspective, 1994 was the year Kurt Cobain took his life. Those 28 years have caused these work to "ripe" significantly.

All this just further illustrates that we are on the cusp of the Psychedelic Concert Poster being realized for its proper historical importance. This will surely result in these beautiful works of art finally earning the attention, and value that they truly deserve.