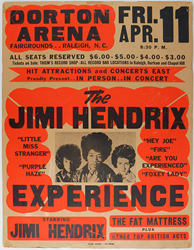 A $15,000 reward is offered for this Jim Hendrix Dorton Arena concert poster.

"We recently found a copy of the famous Jimi Hendrix Dorton Arena Fairgrounds concert poster from 4/11/69 that generated tremendous interest around the world," explained Scott Tilson of Psychedelic Art Exchange, the auction house offering the reward. "Now we have 2 other collectors begging us for this important concert poster. We're hoping our $15,000 reward brings at least one seller out of the woodwork. Folks need to know we would be thrilled to acquire this special poster in any condition and we're willing to pay a world record price to get it," explained Tilson.