Happy Holidays from PAE! We are pleased to present a fresh auction of world-class material just in time for the Winter celebrations to commence. Our Mega Sale Auctions are always full of eclectic and exciting treasures from the world of concert posters and music memorabilia. This month, we are offering a wide variety of items from Salt Lake City, Utah. Among these are rare pieces featuring a multitude of rock n' roll legends from Led Zeppelin, to Pink Floyd, to Chuck Berry. Here are 11 that you should keep you eye on! 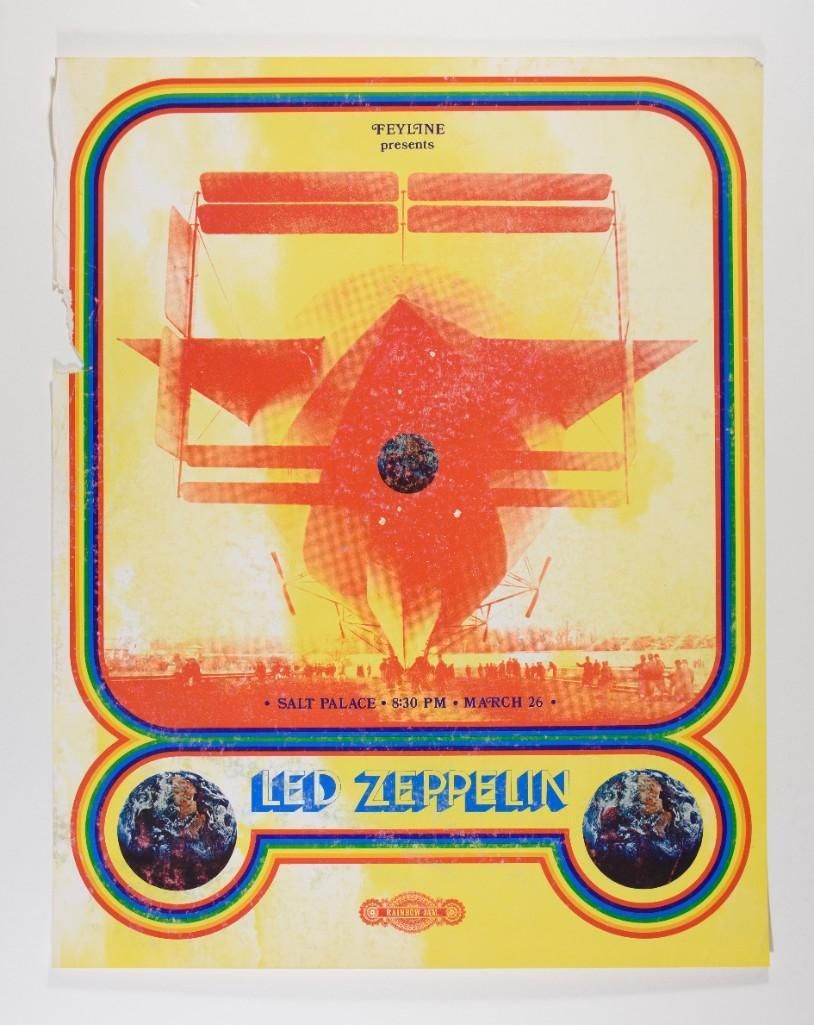 This beautiful Led Zeppelin Original Poster was produced for the group's 1970 appearance in Salt Lake City. The concert was the fifth stop on the band's North American Spring tour and it was a to a record sell-out audience. This was also the fateful tour when Jimmy Page's 1960 Gibson Les Paul Black Beauty guitar was stolen in Canada at the airport. In 2016 the guitar was finally returned to Page!

This Salt Palace poster was produced by Rainbow Jam, run by artists Kenvin Lyman and Richard Taylor. Lyman was the artist who created this treasured Zeppelin piece. This is the sister poster to the Arizona Coliseum Zeppelin Rainbow Jam poster exhibited in the Art of Rock book on plate #4.162.

The legendary Rainbow Jam performed their light wizardry at a plethora of mid-west concerts as well as for Family Dog during the late 60s & early 70s. Richard Taylor was also the Art Director for the early Tron and Star Trek movie motion pictures. Our research indicates only 500 copies of this poster were printed prior to the concert date. 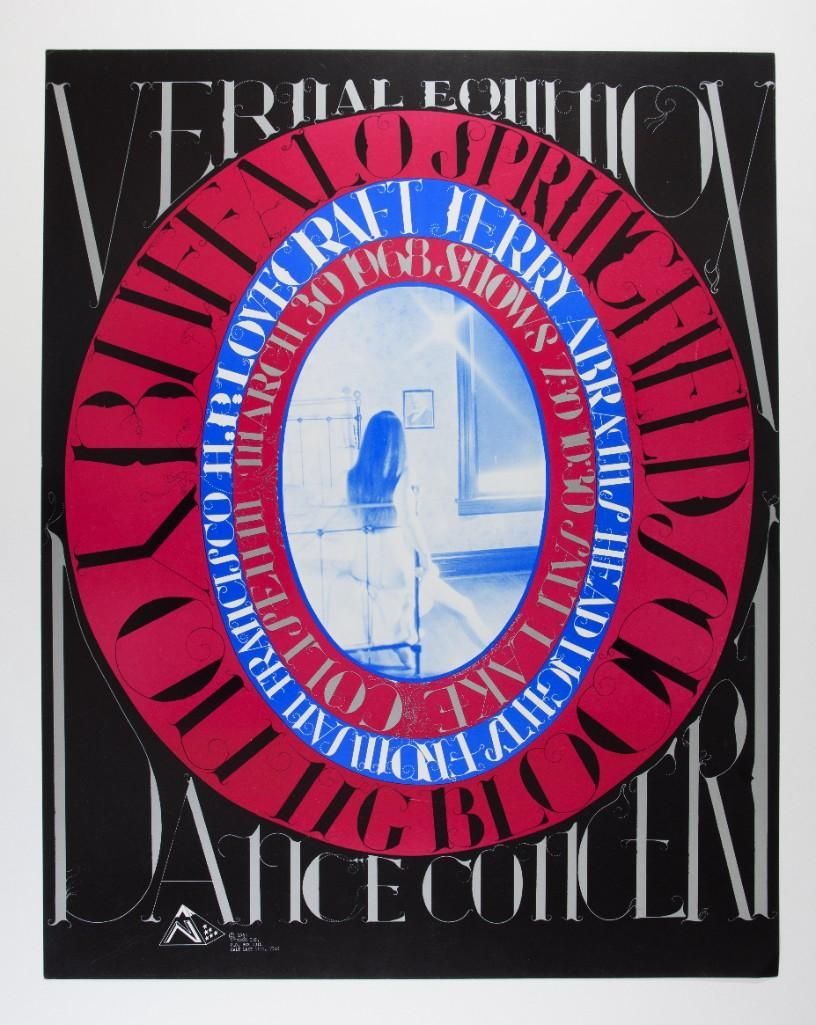 This is only the third time that this ultra scarce, low print run Buffalo Springfield concert poster has appeared in a PAE auction! Buffalo Springfield headlined this Vernal Equinox Dance Concert that was held on March 30th 1968 at the Salt Lake Coliseum. The central photograph of a dark haired nude portends the arrival of Springtime after a long winter rest. The nude girl featured sitting on a bed, is staring at a framed photo of the very early Mormon Prophet & Leader, Brigham Young, who led the Mormon Church members all the way out west to Utah, where he declared "This is The Place".

The beautiful psychedelic artwork was also designed by the late great Kenvin Lyman. Lyman was one of the two RAINBOW JAM Light Artists, along with Richard Winn Taylor, that produced a plethora of high tech mind blowing light shows for rock concerts & planetarium shows in Utah. They also produced some for the Family Dog during the late 60's & 1970s. 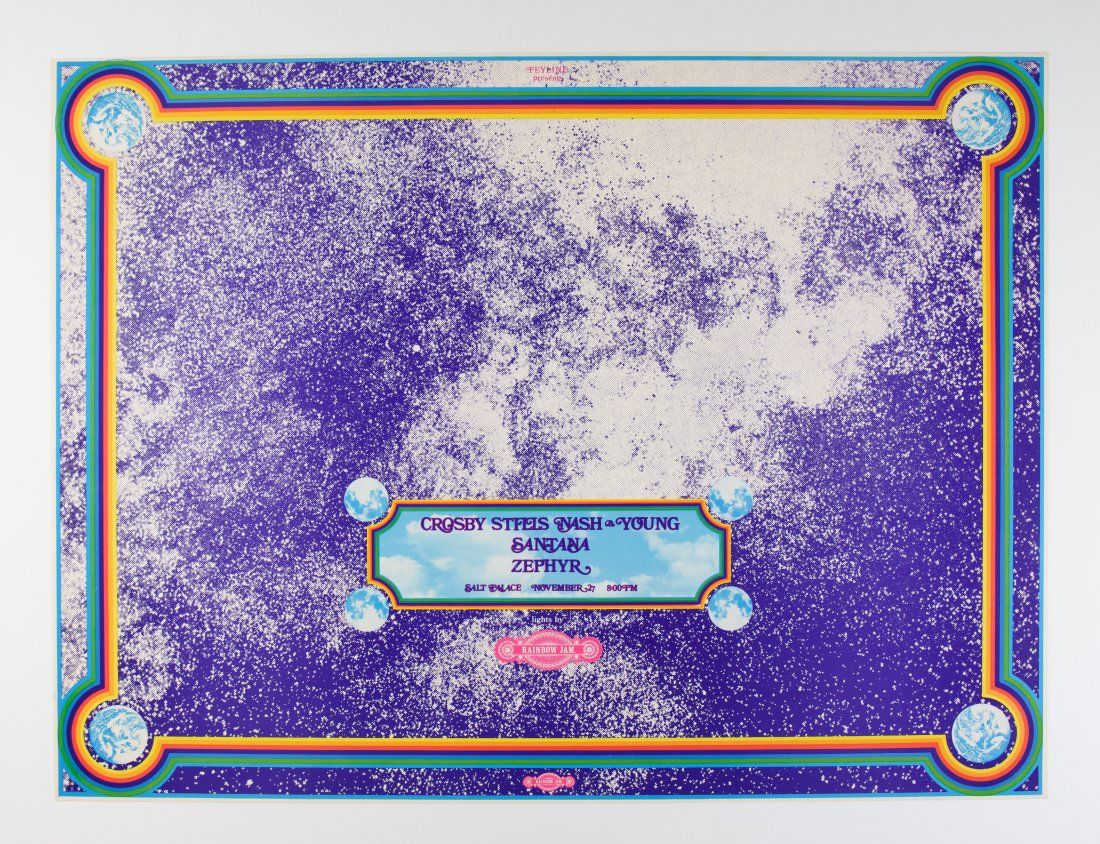 This is only the Second Appearance of this poster in a PAE auction in over 13 years! A LARGE Original First Printing poster featuring the supergroup CSNY along with powerhouse guitarist Santana on November 27th 1969 at the Salt Palace, in Salt Lake City Utah! Without a doubt both bands were deep in their prime during this historic era. This gig at The Salt Palace was part of CSNYs first national tour. Just a couple of weeks following this show, CSNY and Santana appeared at the tragic Altamont gig.

Due to the huge size, expensive, quality stock and full color printing, only 300 to 400 posters were printed in late 1969 to promote the concert and far fewer copies survived in beautiful condition, as a result of its gargantuan size and very limited distribution.

The beautiful artwork on this poster was designed by Richard Winn Taylor, the Art Director for the early Tron and Star Trek movie motion pictures, and one half of Rainbow Jam, discussed above! 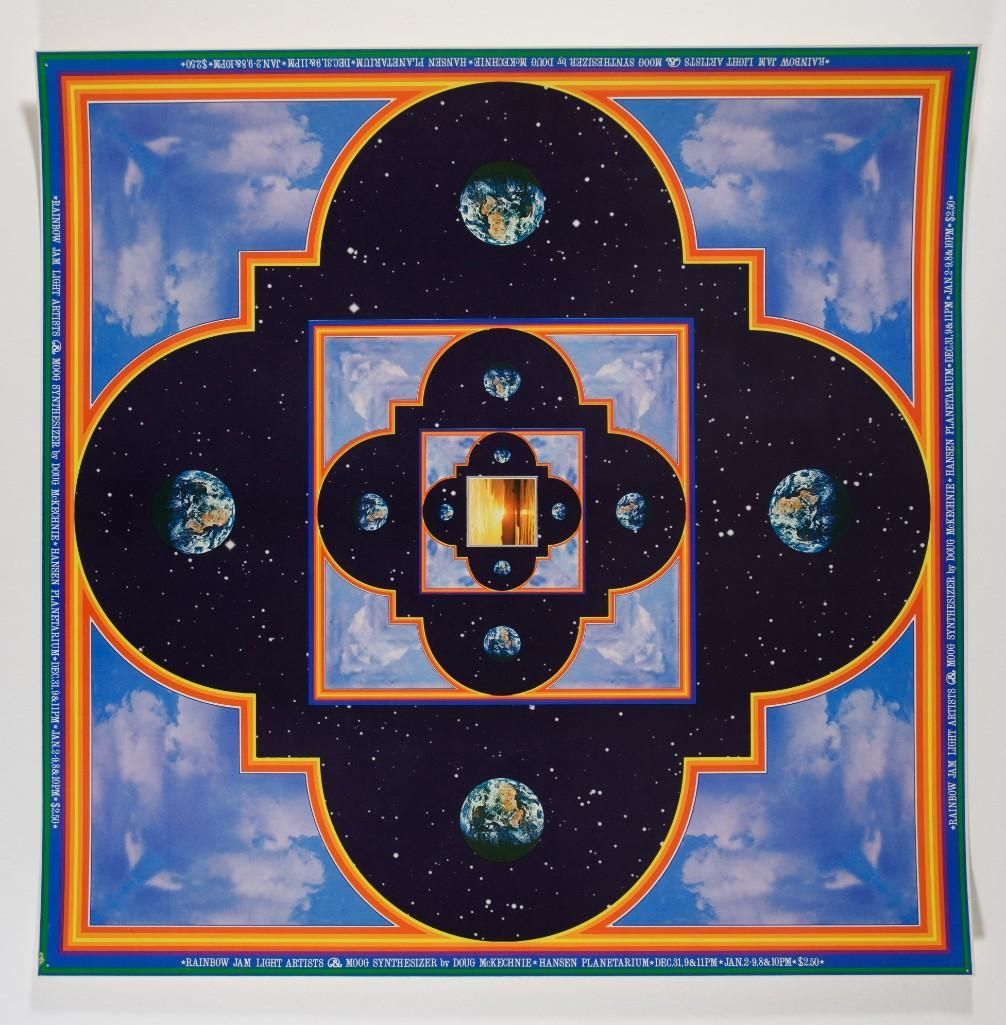 This poster exhibits beautiful artwork by former Utah Rainbow Light Jam light show artist Richard Taylor, who later moved to California to work on the movie TRON. The Hansen Planetarium in SLC is where Rainbow Jam presented many light shows enhanced with taped or live music, especially around the end of December & New Year's Day each year. 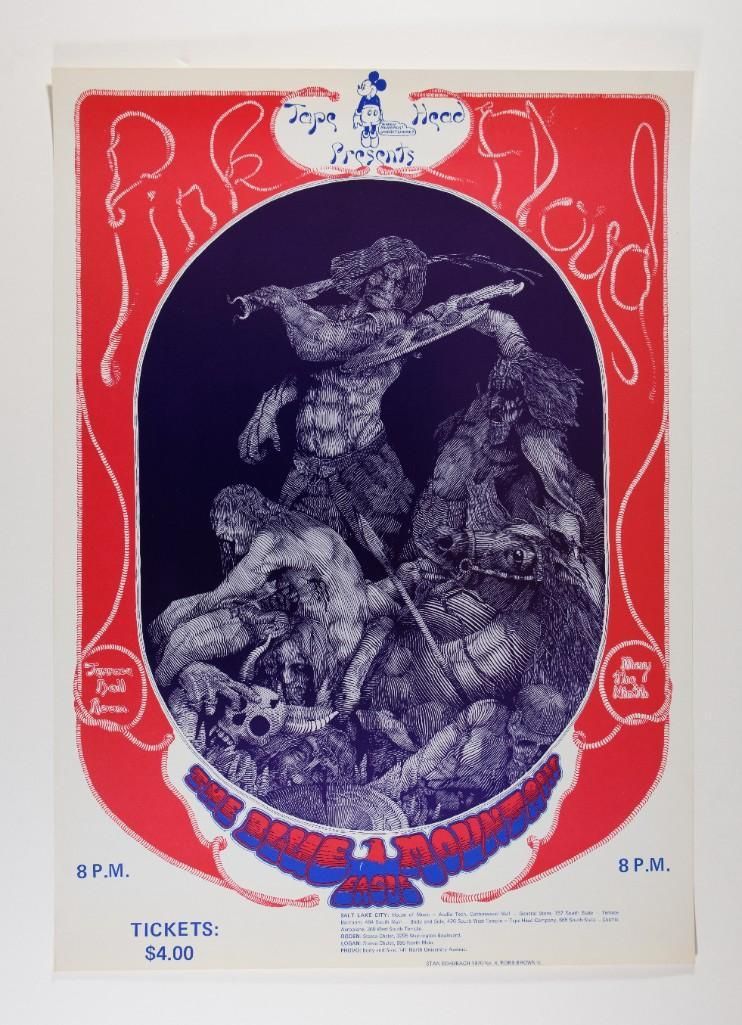 Originally called Coconut Grove when it opened in the 1930's, the Terrace Ballroom would come to host shows in the sixties and seventies by popular bands like The Doors, Frank Zappa, The Grateful Dead and more. It's location was surrounded by Mormons, few of which were interested in being part of a young people's psychedelic movement, therefore posters from this venue seem to be extra hard to find. They were printed in very small quantities of 500, which makes them extremely rare these days, in ANY condition. 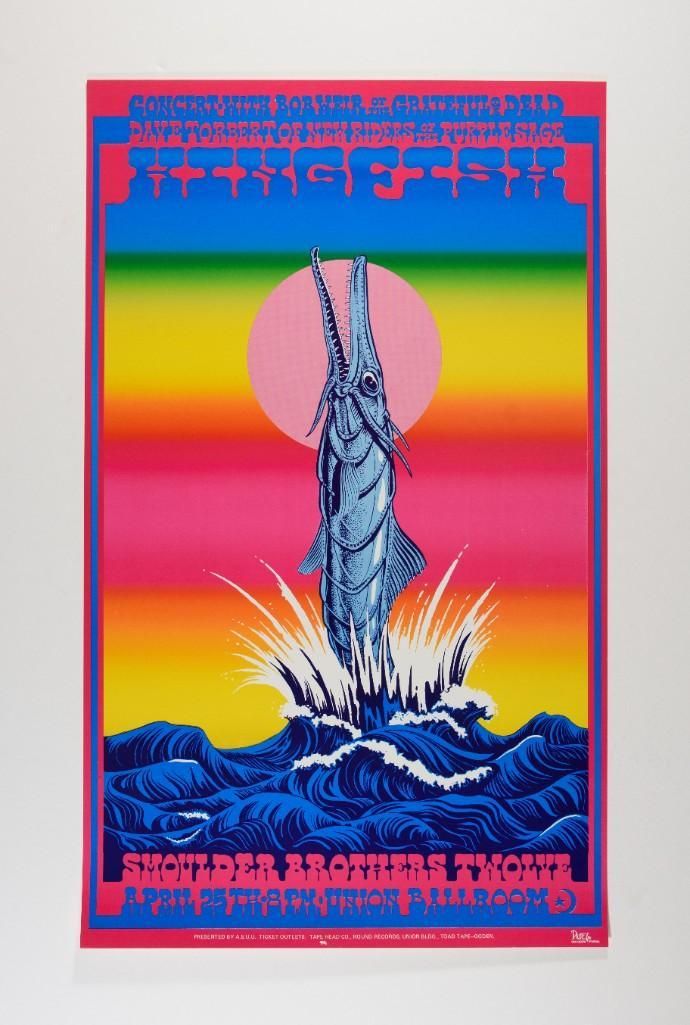 This poster was produced and designed by artist Neil Passey for Kingfish at the Union Ballroom in Salt Lake City in April 1975. Neil Passey was one of the most prolific artists in Salt Lake City from the late 60s and 70s. He created hundreds of music concert posters, from Frank Zappa to The Doors.

The band Kingfish was founded by Matt Kelly in 1973 with New Riders of the Purple Sage bass player Dave Torbert. Kelly was a guest musician on the 1973 Grateful Dead album "Wake of the Flood". In 1974, Kingfish became more well known after Grateful Dead guitarist Bob Weir, a long-time friend of Kelly's, joined the band. Weir toured with Kingfish during the Grateful Dead's hiatus in 1975 and early 1976, and was a band member on their first two albums. 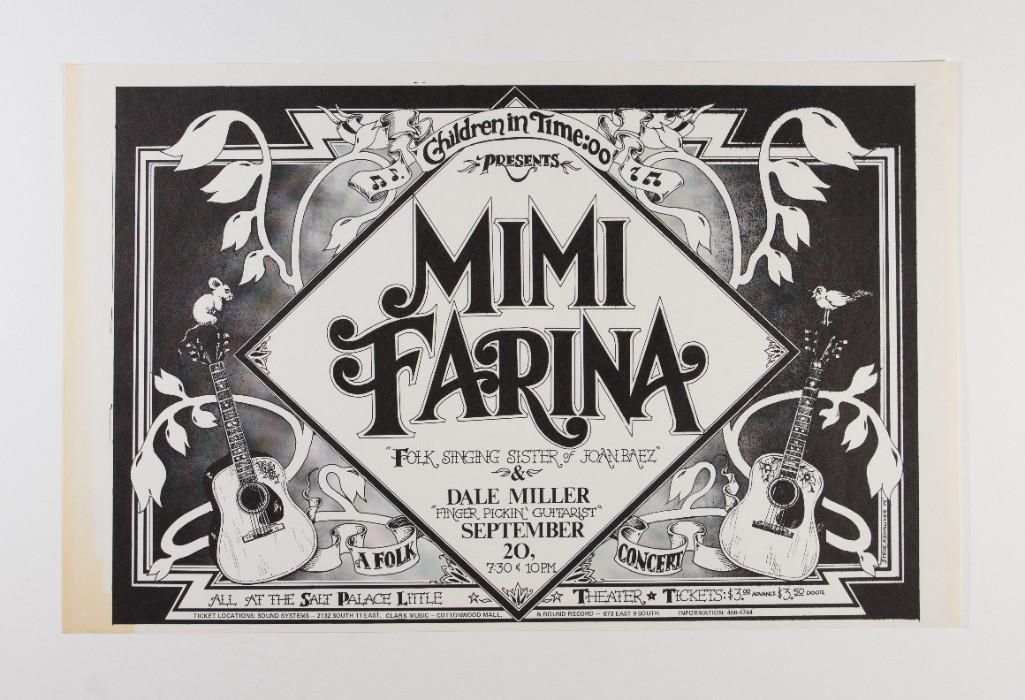 This poster promoted a performance by Mimi Farina, a singer-songwriter and the younger sister of Joan Baez. Farina performed at The Salt Palace in Salt Lake City, Utah on September 20th, 1975. This was the year after Farina created Bread and Roses, a non-profit that brings live music to individuals living in institutional settings such as hospitals and nursing homes. The organization continues to do the same work today as Bread and Roses Presents! 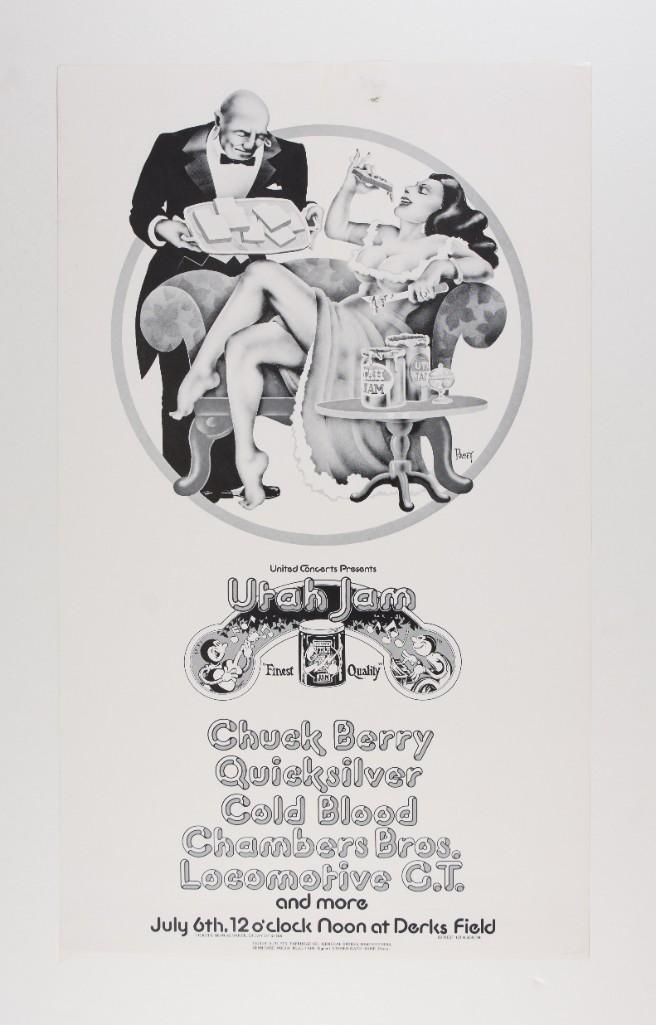 This Chuck Berry issue is appearing in our auction for the first time! It was designed by artist Neil Passey to advertise a July 1976 event at Derks Field in Salt Lake City. Supporting acts included Quicksilver Messenger Service, Cold Blood, and more! Neil Passey was one of the most prolific artists in Salt Lake City from the late 60s and 70s. He created hundreds of music concert posters, from Frank Zappa to The Doors.

9. 1970 Traffic and Big Brother at the Terrace Ballroom Signed Poster 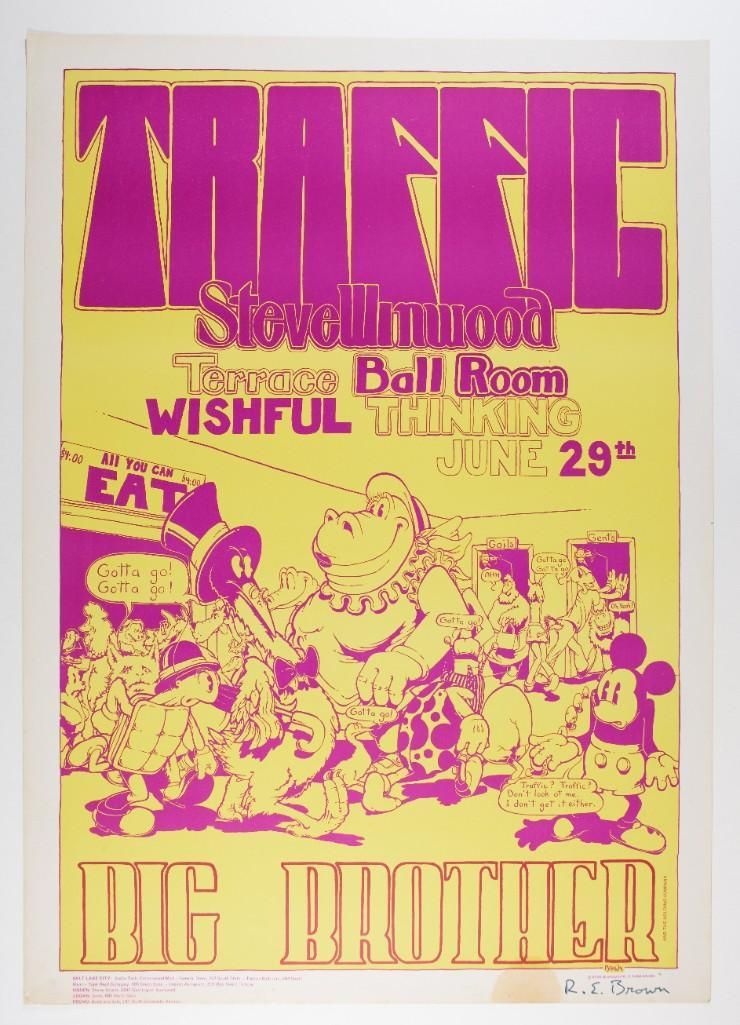 We are pleased to offer this LARGE original Traffic poster from the Terrace Ballroom! In late 1968, Traffic featuring Steve Winwood temporarily disbanded. Guitarist Dave Mason left the group, and in 1969 Winwood joined the supergroup Blind Faith. Winwood and Traffic reunited in 1970 to release the critically acclaimed album John Barleycorn Must Die just weeks after this show at the Terrace, which re-launched their career. Big Brother & The Holding Company also performed. By this time, obviously Janis Joplin was no longer with the band. Big Brother played this night at the Terrace with their new lead singer, Nick Gravenites. Artist Rob Brown designed this beautiful image for this Salt Lake show, and he also SIGNED this poster!

The company that promoted this Terrace Ballroom concert was later told by Disney Productions to "cease & desist" from using the unmistakable likeness of Mickey Mouse on their posters & promotions, such as this one. There were only 1,000 copies of this original poster printed in the one & only print run, prior to the June 29th concert date in 1970, which makes them extremely hard to find these days, in ANY condition. 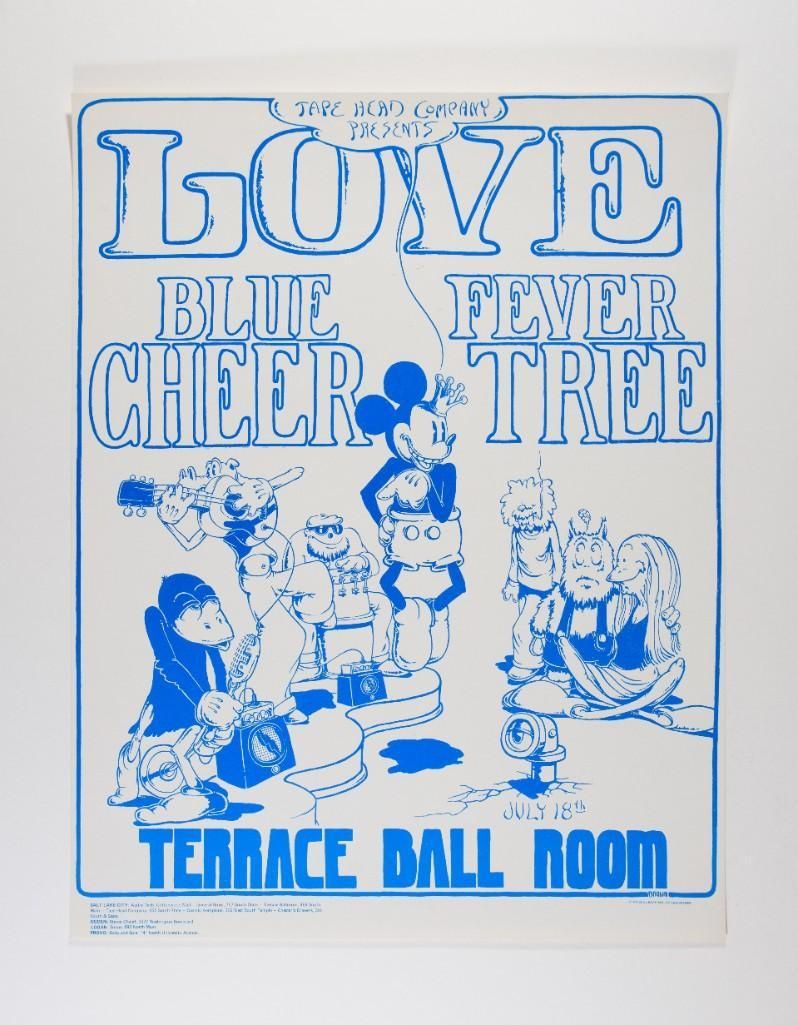 Here's a great looking poster from the Terrace Ballroom which offers tremendous value for such a rarity. Artist Rob Brown designed this beautiful image for this Salt Lake show. There were only 1,000 copies of this original poster printed in the one & only print run prior to the July 18th concert date in 1970 which makes them extremely hard to find these days in ANY condition. 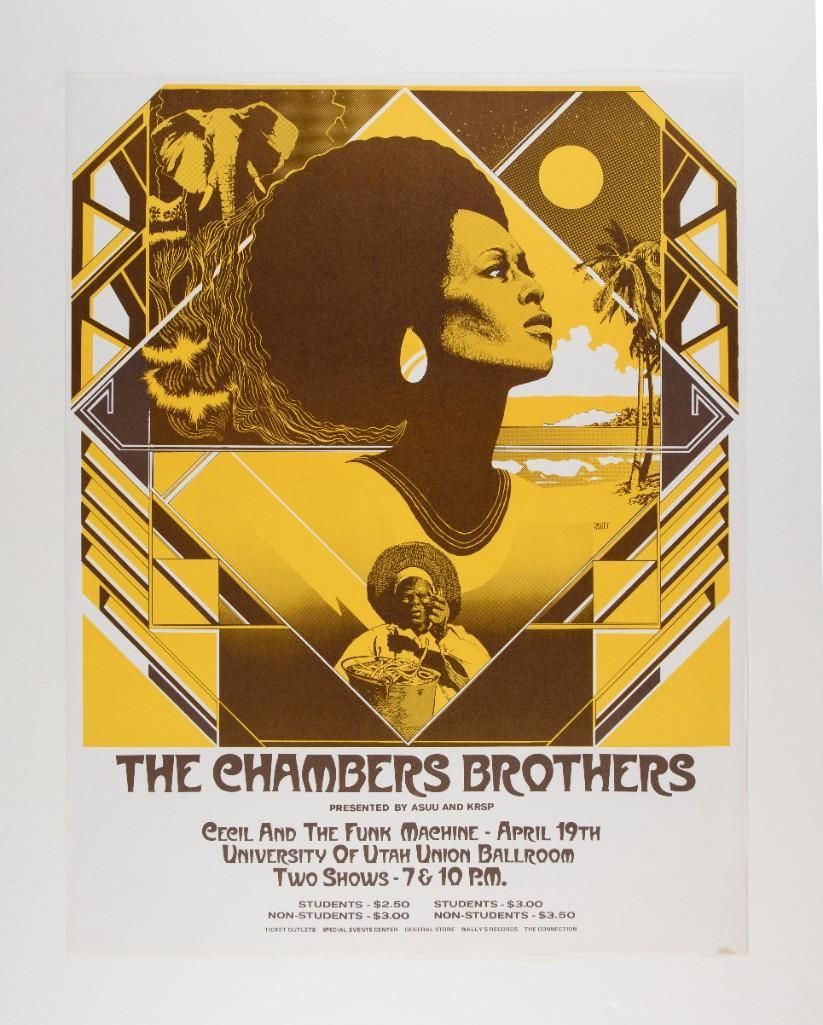 This beautiful original poster designed by artist Neil Passey advertised The Chambers Brothers appearing at the Union Ballroom, University of Utah in April 1974. This is the first time it is appearing in our auction!