Over the past 2 months we have received literally hundreds of calls and emails about major exposure our hobby has been enjoying on a daily basis. Bob Pisani, the well known commentator on CNBC, has been broadcasting daily from his home, due to the Cvid-19 virus. Bob decided to host his broadcasts each day in front of some of his vintage concert poster collection. He is a long time collector and no stranger to Psychedelic Art Exchange. Bob has provided priceless exposure of these amazing pieces of art and history to an unsurpassed demographic, millions of well to do individuals...

12 Reasons Why the Legendary Ultrasounds Collection Represents the Most Exciting Concert Poster Collecting Opportunity in Decades! The Ultrasounds Collection is the result of one determined collector’s 35 year quest to relentlessly seek out the rarest and finest quality Pacific Northwest concert posters. Many of the posters in the collection were designed by the legendary concert poster artist, Mike King.   The posters in the collection were issued from the late 1970’s through the early 2000’s, with the bulk of the collection focused on the highly coveted and historically important period of 1985 - 1995.  Here’s why collectors are so excited this historic collection is finally coming to market. 1)The most important bands of the era –  The Ultrasounds Collection features posters... A $6,000 reward has just been announced by Psychedelic Art Exchange for anyone that has an authentic Jimi Hendrix Shrine Auditorium 2/10/68 concert poster. The poster was created to advertise one performance by Jimi Hendrix on Februray 10, 1968 in Los Angeles. 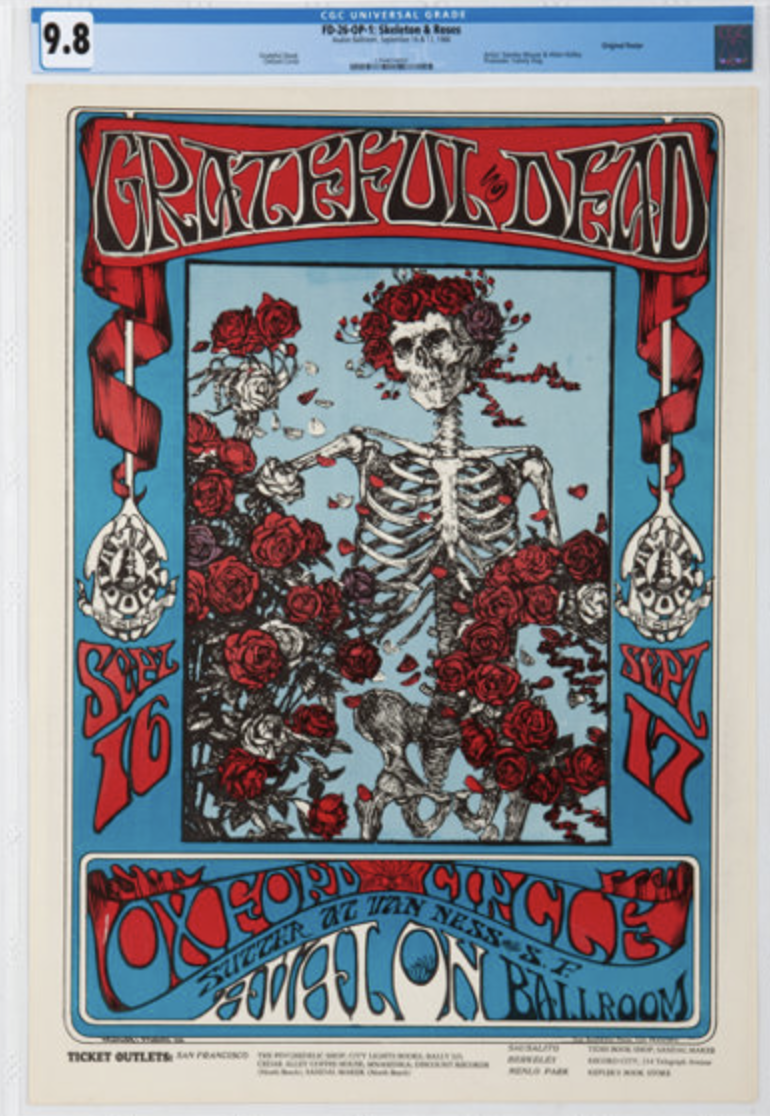 The collectibles world was stunned when a Grateful Dead Skeleton and Roses FD-26 concert poster graded Near Perfect 9.8 realized $118,750 on November 16, 2019. The record far exceeded the previous record of $56,400 for a CGC graded 9.8 specimen that was sold by Psychedelic Art Exchange earlier this year.

The poster was designed by legendary concert poster artists Alton Kelley and Stanley Mouse and was created to promote two performances by the Grateful Dead at the Avalon Ballroom in San Francisco, California, on September 16th and 17th, 1966.

Here’s what we believe the market is telling us with this record price:

This is only common sense. When tiny differences in quality lead to HUGE differences in value, it’s simply folly to invest your hard earned money on a collectible based on the opinion of the seller, if third party grading is available.

For the past 2-3 years, we have been reporting from the front lines on what we call The Rock Poster Revolution. This Revolution started about 4-5 years ago with the introduction of CGC graded concert posters and has resulted in literally thousands of new collectors pouring into the marketplace.

It’s an undeniable fact that this record price is DIRECTLY linked to it being graded a near perfect 9.8 by CGC. We believe this poster would have realized $40,000 to $50,000 if it had been sold without CGC grading, and simply with the opinion of the seller and Mr. Mouse, that it was the “best they’ve seen.”

It’s also entirely possible that the current new owner would have NOT BEEN INTERESTED in this poster at ANY price without CGC grading. CGC created this record price by giving bidders the CONFIDENCE to pay up for “the best of the best” and generated the DEMAND from new players in the hobby.

3) The Best of the Best Never Goes Out of Style.

Collecting vintage concert posters isn’t rocket science. It’s not like trying to figure out what company will be the next Google or Amazon. This market is now 50 + years old. Collectors have SO much more information than the trailblazers that were collecting concert posters in 1975, or even 1995.

The market tells you which issues are considered truly Blue Chip. All that’s necessary is the discipline to buy the right issues when they are offered, and the patience to collect over a long time horizon of 10-20 years, or more. If you would like a list of what we consider to be Blue Chip issues, shoot us an email.

4) It’s Even Crazier to Sell Without CGC grading!

It’s easy to immediately understand all the obvious benefits that independent CGC authentication and grading offers buyers. But let’s turn things around for a second and see things from a seller’s perspective.

It’s obvious to anyone that wishes to sell a blue chip concert poster that record prices are generated by CGC grading. (if they are active in the market and understand what’s happening) So if CGC grading is available for the issue being sold ( CGC does NOT currently grade all posters) why would a seller avoid CGC grading, the number one driver of demand and record prices?

The answer should be fairly obvious, the quality or originality is “not quite there”. These posters wind up being sold in venues to buyers where CGC grading is still not considered important. At PAE, we proudly proclaim ourselves, “The Collector’s Friend” We want to be the safe and secure place to buy, sell and learn about vintage concert posters. We require that EVERY poster we sell be accompanied by third party authentication and grading by CGC, if the service is available for that issue.

Again, this policy to us, is simply common sense. We have no interest in being in the opinion business. And we want our buyers to be super pleased, repeat clients. And we want our consigners to enjoy record prices for their posters. EVERYONE wins.

But, make no mistake, this policy costs us a ton of money in the short run.

Every day we return posters to consigners that sent them to us to be auctioned, but are unhappy with the CGC grade that is assigned, or with hidden expert restoration they disclose. These posters get taken out of the holders and sold through other venues where third party authentication is consider unimportant.

So next time someone tells you a poster is the “best of the best”, ask yourself, “according to who?” And if CGC grading is not available, ask yourself, “what guarantee of satisfaction s being offered by the seller?”

There is no Santa Claus in concert poster collecting, but if you follow a few simple rules and use basic common sense, this a rapidly growing, emerging market that offers many gifts of it’s own!

12 Reasons Why the Legendary Ultrasounds Collection Represents the Most Exciting Concert Poster Collecting Opportunity in Decades!
May 26, 2020